Ack. Having lived in the northeast my entire life, you’d think I’d be used to snow in April, and I guess I am–but that doesn’t mean I’m in the mood for it. Since I live in Vermont, I do run into dedicated skiers who love spring snow. I like to get out cross-country skiing and snowshoeing, but right now all I can think about are the crocuses, daffodils and lilies popping up under the snow. 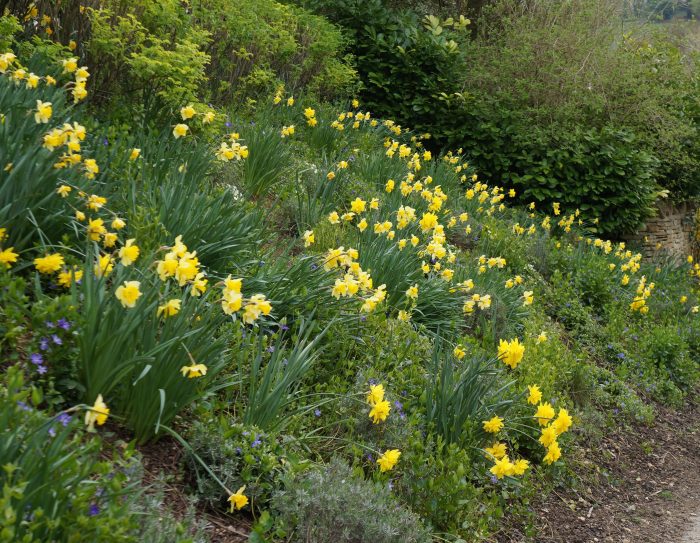 The daffodils in the photo are in the Cotswolds in England, not here. Pretty, aren’t they? I took this shot a few years ago on a good “ramble.”

The other night, I was home alone, writing while Joe helped our daughter move stuff, which involved his truck. (How did we survive so long without a truck?!) We had quite the wind storm. It knocked out power here for several hours. It wasn’t so cold I needed to worry about heat, and I snuggled under the down comforter and went to sleep. I was dead to the world when the power popped on again. Lights, TV. I was awake! I couldn’t get back to sleep and finally went downstairs, made coffee and started writing again.

Then the tree guys came just after the crack of dawn. We lost a major section of a river birch in heavy snow earlier this winter, but they did a great (and ultra-fast) 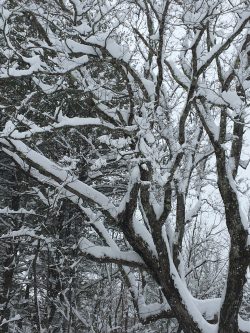 job making it look whole. Now it just needs LEAVES! (The photo is the tree outside my office.)

Last weekend, it was warm enough to sit outside at my mother’s place. She’s slowed down at 83, but we enjoyed looking at the linden tree, the crabapple and the sugar maples, planning flowerpots and imagining green grass. My brother and his wife were up from New York and brought a ham. My daughter and her two little girls came in from Boston. While Mother rested, the rest of us took a walk in the woods. Little Oona and Niamh had a great time looking for moose poop and throwing stones in the brook. After such a day, no wonder I’m not thrilled with this snow.

The River House hit stores last week. Lots of blogs, Q&As and social media. All such fun! I love hearing from readers who’ve already read and enjoyed the story. We’re looking forward to a quiet weekend. I’m going for a “long run” on Sunday, part of my training for the Covered Bridges Half Marathon in June. I have new running shoes, Brooks Ghost 10. So far, so good. The forecast calls for warmer temperatures and even 60 degrees by late next week. Yay!